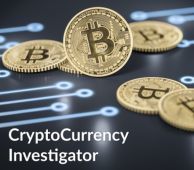 Focusing primarily on Bitcoin (the most widely used CryptoCurrency), this five-day course will give you a rounded understanding of how the currency is used, both legally and illegally.

Beginning with a basic view of how it is accessed, acquired and exchanged, you will then have the opportunity to interactively work with other students to create your own Bitcoin wallet and engage in small transactions. Our industry expert will guide you through the experience and will draw from real-world scenarios to illustrate the usage.

Combined, this will give you real-life experience and understandings of both tracing transactions through the blockchain and, importantly, learning how to draw accurate conclusions to potentially be used as intelligence or evidence.

Until fairly recently, cryptocurrencies were a concept very much confined to the realms of hackers, criminals, and other digital enthusiasts. Then, throughout 2016 – 2017, many ransomware cyber attack cases were publicized in the media, with CryptoCurrency becoming a buzzword surrounding the attention.

This only intensified with the value of Bitcoin reaching an all-time high in mid-December 2017 and suddenly, it seems that everyone is crypto-crazy.

No longer is the idea of virtual, digital money considered to be a hare-brained idea dreamed up by somebody on the internet. Whilst previously viewed across the investigative community as primarily as a tool for criminals, its mainstream use is far wider, and also claims many victims.

To effectively utilize investigative opportunities surrounding CyrptoCurrency, it is imperative that both cyber and non-cyber investigators have an understanding of the subject – it could be invaluable to the success of a case.