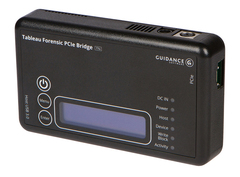 Caution: SKU W2005 does not include the power supply supply, cables, and other accessories.  If you need these items, please purchase SKU W2000 instead.

THE FIRST PORTABLE PCIe FORENSIC WRITE BLOCKER
The UltraBlock PCIe enables portable forensic acquisition of PCIe SSDs. With the UltraBlock PCIe you will be equipped to handle the vast array of new laptops and tablet computers that are making use of these high performance PCIe Solid State Drives.